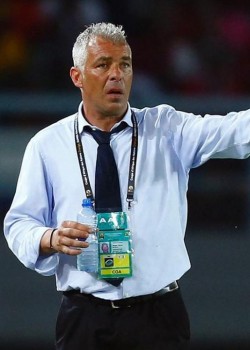 Having completed his training at FC Porto, it was also at this club that he spent much of his career as a professional and where he assumed the role of team captain and a prominent figure in some of the club’s greatest national and international successes, such as winning the Champions and Europa League led by coach José Mourinho, also winning 8 national champion titles, having been 50 times international for Portugal national team.
In the 2005/2006 season, he ended his career as a professional footballer and in the following season took on the position of assistant coach of the main team of SC Braga and during the season he would eventually assume the role of head coach.
The first title as a coach would appear in the 2008/2009 season at the service of SC Olhanense, reaching the 1st place in the 2nd Portuguese League and consequent rise to the top level of Portuguese football.
The first international experience as a coach appears in the 2011/2012 season at CFR Cluj of Romania and with it comes another title, this time in the 1st Liga Romanian, the result of an excellent work carried out throughout the season, thus demonstrating all the skills and qualities of your work in previous seasons.
Since then, Jorge Costa has accumulated several national and international experiences in countries such as Cyprus, Tunisia, France, India and was also at the helm of the Gabon national team from 2014 to 2016, participating in CAN 2015 and qualifying for the FIFA World Cup. Russia in 2018.
Methodical, organized, ambitious, dynamic, leader and apologist for supported football, with quality in the 5 moments of the game are some of the characteristics that best define the SLWORDLTEAM coach.

© Copyright 2023 SLWORLDTEAM
Back to Top