The leading scorer of the Portuguese Championship moved from Amarante FC to the Bulgarian club FC Etar who won the title of 2nd League champion last season and their promotion!
The contract lasts for two seasons, at the time of signing Badara said “it is the happiest day of my life, to reach the 1st League of a European championship, I had a dream and I won it, I will work to achieve many more.”
After the medical examinations, the signature of the contract was made in the presence of the Team Sports Director and his agent, Sérgio Leite.
SLWORLDTEAM to change lives!
The happiness of our athlete fills us with pride for the work done!
Congratulations Badara, good luck scorer!
Always together! 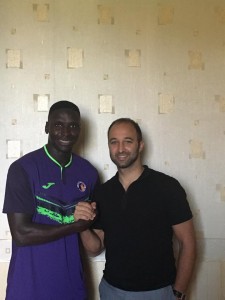 © Copyright 2022 SLWORLDTEAM
Back to Top